Finally, Obama is Protecting Us 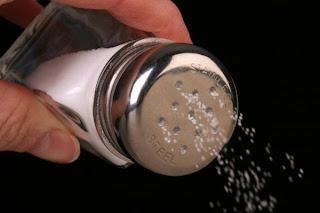 Finally, Obama is protecting us from unemployment terrorists Iran salt. That's right. Real unemployment is around 17%. Terrorists are hatching new plans for our destruction and mad Mullahs in Iran are building a nuclear bomb. What is President Obama planning to do? He wants to regulate your salt. I don't know about you, but I sure lay awake last night worrying about my salt intake.

The Food and Drug Administration is planning an unprecedented effort to gradually reduce the salt consumed each day by Americans, saying that less sodium in everything from soup to nuts would prevent thousands of deaths from hypertension and heart disease. The initiative, to be launched this year, would eventually lead to the first legal limits on the amount of salt allowed in food products.

Salt doesn't deserve the bad rap it usually gets. Salt may actually be natures antidepressant. Overweight people with salt sensitive hypertension probably should reduce salt intake, but some experts think a low salt diet could actually be dangerous for healthy people.

Statistics are somewhat like expert witnesses in that they can be used to testify for either side depending on what you want to prove. When Michael Alderman, a highly regarded epidemiologist and past president of The American Society of Hypertension scrutinized the same data in patients who were not overweight he reported that "the more salt you eat, the less likely you are to die."--(from heart disease or anything else).

The reason for this is that when you restrict vital nutrients like salt (or cholesterol) all sorts of strange things can result....

There are no research reports that justify putting everyone on a low-sodium diet.