Another Nail in the Coffin of Cap-and-Trade 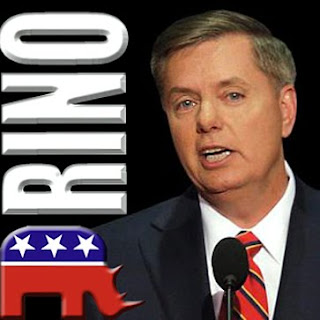 RINO Senator Lindsey Graham (R-SC) is pulling his support for the Democrats Cap-and-Trade bill. Graham is angry Democrats are planning to push immigration reform before the energy bill. Senator Graham has been working with Democrats on immigration reform too, but he thinks it is too politically charged and will poison the atmosphere in Washington.

In a move that may derail a comprehensive climate change and energy bill in the Senate, one of the measure’s central architects, Senator Lindsey Graham, has issued an angry protest over what he says are Democratic plans to give priority to a debate over immigration policy.

Mr. Graham, Republican of South Carolina, said in a sharply worded letter on Saturday that he would no longer participate in negotiations on the energy bill, throwing its already cloudy prospects deeper into doubt. ...

I think you mean "poison" the atmosphere in Washington. I LOVE the graphic though. Super!

Why is Goober Graham all of a sudden trying to look tough? Maybe because of this… http://ramparts360.com/uncategorized/shut-up-bill-clinton/

"I think you mean "poison" the atmosphere in Washington. I LOVE the graphic though. Super!"