ABC and FOX issue "fat"-wa against plus size models

ABC and FOX are refusing to run a Lane Bryant ad featuring a full-figured model. ABC said there was too much cleavage. Of course, a plus size model should be expected to have more cleavage than an anorexic Victoria Secret model. FOX ran a similar Victoria Secret ad during an 'Idol' episode. 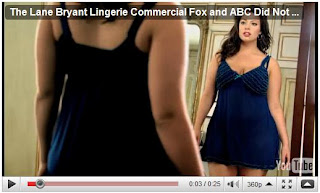 The Disney-owned network refused to air the brand's lingerie ad during its hit show "Dancing with the Stars,"...

"It certainly appears to be discrimination against full-sized women."

Maybe they are afraid that too much cleavage will cause more earthquakes!

"Maybe they are afraid that too much cleavage will cause more earthquakes!"

Really? They won't air it during "Dancing With the Stars" because it shows too much cleavage? Have they seen their show? We're lucky if the female dancers have a scrap of fabric wrapped around them. In fact, one dancer performed in her bra and panties. Unbelievable...

Thank Goodness the networks have some decency. I see enough fat on display at the beach, definitely don't need it on my TV.