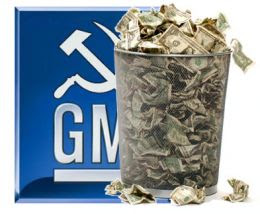 GM used other TARP bailout money to repay their bailout loans. And they had the gall to brag about it in an ad claiming they paid their loans back early.. GM isn't making any money selling cars. In April, they reported a 2009 4th quarter loss of $3.4 billion.

A top Senate Republican on Thursday accused the Obama administration of misleading taxpayers about General Motors' loan repayment, saying the struggling auto giant was only able to repay its bailout money by dipping into a separate pot of bailout money.

Sen. Chuck Grassley's charge was backed up by the inspector general for the bailout...

"The bottom line seems to be that the TARP loans were 'repaid' with other TARP funds in a Treasury escrow account. The TARP loans were not repaid from money GM is earning selling cars, as GM and the administration have claimed in their speeches, press releases and television commercials," he wrote.