A View of the Future Under 'Greens' 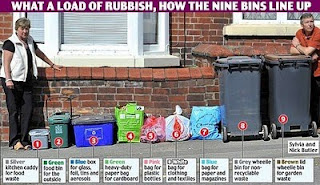 Families in Great Britain are facing a nine-bin nightmare under the control of 'green zealots.' Most people a supportive of recycling, but this is insane.

There has already been a storm of protest with warnings that the scheme is too complex and homes simply don't have the space to deal with the myriad bins, bags and boxes.
...

Compulsory recycling is commonly enforced by bin police who can impose £100 on-the-spot fines for breaches like overfilled wheelie bins, extra rubbish left out, or bins put out at the wrong time.

If people do not pay the fines, they can be taken to court, where they face increased penalties of £1,000 and criminal records.

Officials in Newcastle-under-Lyme in North Staffordshire anticipated trouble when they introduced the nine-bin system last month.

Hat tip JamieWearingFool.
Posted by Bluegrass Pundit at 8:02:00 AM

Let's take the garbage out and recycle Congress in 2010.

The "Green Police" of the UK... and Environmentalists think that Europe is some kind of model of perfection.

That's what they want: a US version of the Green Secret Police, come to make sure you recycle or ELSE.