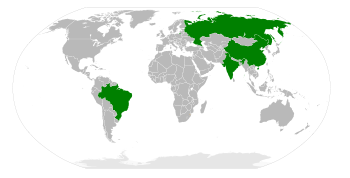 BRICS countries are close to completing a brand new Internet backbone that would bypass the United States entirely and thereby protect both governments and citizens from NSA spying. [...]
Brazil is set to finalize a 34,000-kilometre undersea fiber-optic cable by 2015 that will run from Vladivostok, Russia to Fortaleza, Brazil, via Shantou, China, Chennai, India and Cape Town, South Africa.
According to the Hindu, the project will create, “a network free of US eavesdropping,” which via legislative mandates will also force the likes of Google, Facebook and Yahoo to store all data generated by BRICS nations locally, shielding it from NSA snooping.
“The BRICS countries have the muscle to pull this off,” notes Washington’s Blog. “Each of the BRICS countries are in the top 25 largest economies in the world. China has the world’s second largest economy, India is 3rd, Russia 6th, Brazil 7th, and South Africa 25th.