Our national nightmare is over. The shutdown ends and Obama hits the golf course again... 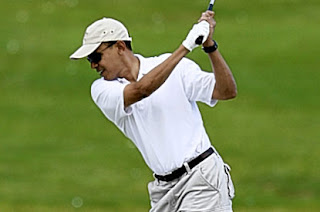 President Obama returned to the golf course on Sunday for his first round since before the government shutdown began.
The golf outing at Virginia’s Fort Belvoir is the first since a Sept. 28 outing on the same course. That round was his 35th of the year — a new annual record according to White House Dossier.
The president played just 19 rounds of golf in 2012, an election year. He golfed 34 times in 2011, 30 times in 2010, and 28 times in 2009. Sunday’s round will be the 147th golf outing of his presidency.