Flashback: Michelle Obama Princeton Thesis: A Racist Behind Every Tree 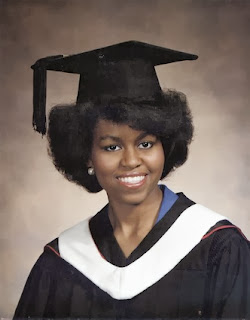 
Michelle Obama's senior year thesis at Princeton University, obtained from the campaign by Politico, shows a document written by a young woman grappling with a society in which a black Princeton alumnus might only be allowed to remain "on the periphery." Read the full thesis here: Part 1, Part 2, Part 3, Part 4.
"My experiences at Princeton have made me far more aware of my 'blackness' than ever before," the future Mrs. Obama wrote in her thesis introduction. "I have found that at Princeton, no matter how liberal and open-minded some of my white professors and classmates try to be toward me, I sometimes feel like a visitor on campus; as if I really don't belong. Regardless of the circumstances underwhich I interact with whites at Princeton, it often seems as if, to them, I will always be black first and a student second."