Scary: Nancy Pelosi claims, "I’m here on a mission — and when my work is done, that’s when I will leave,” 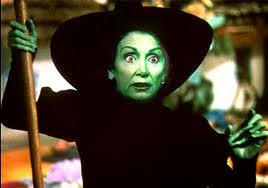 When Nancy Pelosi does leave, you can bet it will be on a broom.


Nancy Pelosi isn’t going anywhere.
While many thought the California Democrat would step down as House minority leader after this Congress, Pelosi confidants now believe she will remain atop House leadership through 2016 and maybe even longer.

Pelosi herself won’t tip her hand about her plans. But she doesn’t appear to be contemplating retirement.
“I’m not here on a shift. I’m here on a mission — and when my work is done, that’s when I will leave,” Pelosi said in a recent interview with POLITICO.
Pelosi declared the main reason she chose to stay put the past two years is to see Obamacare, which she had a strong hand in crafting and pushing through Congress, implemented successfully. Pelosi, like other Democrats, has publicly complained about the disastrous online rollout of the program, but she remains convinced it will turn out well in the long run.