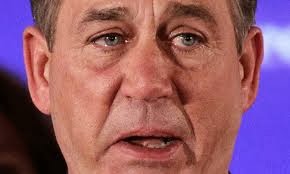 For what? Being the worst negotiator in history? If you go into a car dealership and they won't negotiate the price of their vehicle, you don't sit there and keep making higher and higher offers until you hit their price. You have to be willing to give them your number, tell them to call you when they get serious and walk out. Harry Reid only cares about trying to keep his Majority Leader position after 2014, but there was no way Obama would have took a chance with going past the the debt ceiling. If the market turmoil caused a new recession, it would be the 'Obama recession,' not the 'Republican recession.' Personally, I think the potential reaction was way overblown. The stock markets didn't meltdown in fear. Actually, they went up during the shutdown.


At the last GOP conference meeting of the two-week government shutdown, no lawmakers went to the microphones to give their take.
Instead, after Speaker John Boehner told Republicans they had “fought the good fight,” they all rose up to offer a standing ovation. “It was one of the easiest meetings we’ve ever had,” says Representative Mick Mulvaney of South Carolina.
“I think he has strengthened his position in leadership,” Representative John Fleming says about Boehner. “He hung in there with us. He’s been reluctant to go to these fights and now that we have stood up and fought for our values and he’s been there with us, leading, I think his stock has risen tremendously. He has great security as our leader and our speaker.”