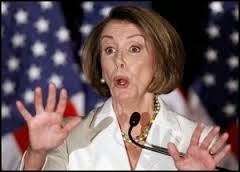 "What difference does it make" is the new democratic mantra...


(CNSNews.com) – House Minority Leader Nancy Pelosi (D-Calif.) asked why reporters were making an issue out of the additional spending that was added to the continuing resolution that re-opened the federal government and increased the debt limit.
“What difference does it make? Why are we talking about this? We’re talking about a bill that as I said last night, I’m not asking anybody to vote for this bill on the merits,” Pelosi said.
The bill included funds to fix flooded roads in Colorado, $3 million for a civil liberties oversight board, a death benefit payment to the late Sen. Frank Lautenberg’s (D-N.J.) widow, as well as an increase in authorization for spending on construction on the lower Ohio River in Illinois and Kentucky, the Hill reported.