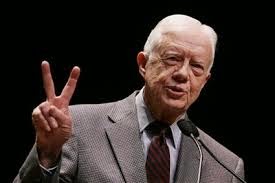 Jimmy Carter calling anyone a nutcase should explode the irony meter...


ASPEN, Colo. — President Jimmy Carter called a tax on carbon emissions “the only reasonable approach” to combating climate change during an appearance here Tuesday, but lamented that even piecemeal actions are unlikely to get through a divided Congress.
Carter, 89, who received a lifetime achievement award on the final day of the American Renewable Energy Day summit, spoke during a luncheon attended by a number of conservationists as well as Ted Turner, T. Boone Pickens and Tom Steyer, the California billionaire pledging to devote his personal finances to political candidates willing to take action on climate change. [...]
“The biggest problem we have right now is some nutcases in our country who don’t believe in global warming. I think that they are going to change their position because the evidence of the ravages of global warming is coming or is already there.”