Obama's Buddies in the SEIU Want to Seize Your 401k 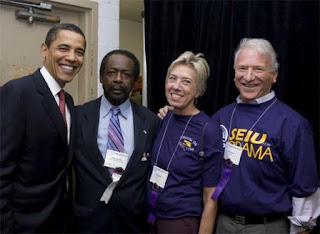 In return, they want to give you a nice "goobermint" government pension. If you think this could never happen, please remember who the top visitor to the White House was last year. It was SEIU President Andrew Stern. Apparently, the SEIU is very concerned something could happen to your 401k and you would be better off if it were rolled into a new government controlled pension plan. Undoubtedly, the government could issue you some worthless IOU's for your money. The SEIU is also concerned about the 7 of 10 workers who don't have a 401k. Perhaps they would be willing to share yours with these unfortunate individuals.

One of the nation's largest labor unions, the Service Employees International Union (SEIU), is promoting a plan that will centralize all retirement plans for American workers, including private 401(k) plans, under one new "retirement system" for the United States.

In effect, government pensions for everyone, not unlike the European system and regardless of personal choice.

Touch my fking money and we go to war.

Your Blog is Great! Yes, Barry & the SEIU & ACORN are wanting to seize our Liberty also.

Obama wants us to start a revolution and then he will be able to declare martial law and take control of everything. We will just have to think smart and stay informed.

Your money has already been touched. It's already been pilfered, stolen, and counterfeited, now it's virtually worthless. The $100,000 you think that you have, in today dollars is not what it was in 1981, nor what it will be in 2015. That $100K will not purchase a car nor pay the insurance, taxes, fuel, and maintenance to keep a vehicle running. If you're planning on retiring in 2020+ or later, you're done. Your money is already gone. So you might mean touch my 401k and not money, but either way you haven't done anything about Bush2, Clinton, Bush1, and Raygun stealing your money via Federal Reserve inflationary policies, what makes anyone think you'll do something when Obama & SEIU does it.

Our liberty and economic freedom is already gone, we've long since been a socialist despotic nation that kills and incarcerates it citizens.

None are more hopelessly enslaved than those who falsely believe they are free.
Johann Wolfgang von Goethe

Or who think their 401K haven't already been stolen.