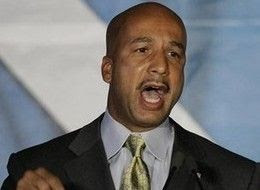 Not only was Ray Nagin may have been the world's worst mayor, he was nuts too.

“I started wondering if during the night I would be visited by specially trained CIA agents. Could they secretly shoot me with a miniature, slow-acting poison dart?"

(Fox Nation) — Since Hurricane Katrina’s winds died down, Ray Nagin has cast his role as mayor of New Orleans as a me-against-the-world struggle to save his hometown against inept government officials and racist forces, sometimes even laying out vague conspiracy theories to bolster his worldview.

But that perspective has never been laid out as starkly as in Nagin’s self-published memoir, “Katrina’s Secrets: Storms After the Storm,” released Wednesday . . . The former mayor, who left office last year, also admits in the 330-page paperback that the infamously botched nature of the disaster response led him briefly into a state of paranoia. Nagin writes that he suspected the federal government of trying to poison him, and he believed at one point that the city’s wealthiest, most powerful residents were trying to bug his hotel suite. . .

Nagin also worried about becoming a target of sinister forces after his famous Sept. 1, 2005, rant on WWL-AM, which the former mayor writes was prompted by reports that Blanco and U.S. Sens. Mary Landrieu and David Vitter had bragged “about how well things were going,” even as evacuees continued to suffer at the Superdome and Convention Center.

“I thought to myself, ‘I’m a dead man! I have just publicly denounced the governor, U.S. Senators, FEMA and the president of the United States,’” he writes. “I started wondering if during the night I would be visited by specially trained CIA agents. Could they secretly shoot me with a miniature, slow-acting poison dart?