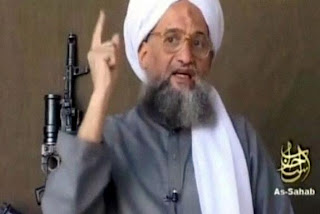 Fire up the predator drones...

Bin Laden was killed in a U.S. commando raid in Pakistan last month. Al-Zawahri, who will turn 60 next week, had been bin Laden’s second in command.

He is the son of an upper middle class Egyptian family of doctors and scholars. His father was a pharmacology professor at Cairo University’s medical school and his grandfather was the grand imam of Al-Azhar University, a premier center of religious study.