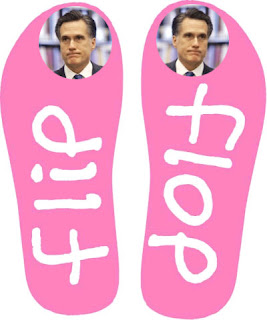 Who would have thought Romney's conversion to pro-life was disingenuous?


(Politico) — Five Republican presidential candidates have signed a pledge to advance the anti-abortion movement if elected to the White House, but the current front runner for the 2012 GOP nomination — Mitt Romney — isn’t one of them.

Michele Bachmann, Newt Gingrich, Ron Paul, Tim Pawlenty and Rick Santorum each signed the pledge, sponsored by Susan B. Anthony List, vowing to nominate judges and appoint executive branch officials who are opposed to abortion. The pledge also commit signers to push legislation to end all taxpayer funding of abortion and to sign a law to “protect unborn children who are capable of feeling pain from abortion.”

Mitt Romney, who’s leading in national and early state opinion polls, declined to sign.
“Governor Romney pledged in the last campaign that he would be a pro-life president and of course he pledges it today,” said spokeswoman Andrea Saul in a statement. “However, this well-intentioned effort has some potentially unforeseen consequences and he does not feel he could in good conscience sign it. Gov. Romney has been a strong supporter of the SBA List in the past and he looks forward to continue working with them to promote a culture of life.”

The pledge calls for legislation to defund Planned Parenthood — already a rallying point for the social conservative movement — and to cut funding to “all other contractors and recipients of federal funds with affiliates that perform or fund abortions.”