Van Jones and MoveOn.org attempt to create progressives answer to the Tea Party 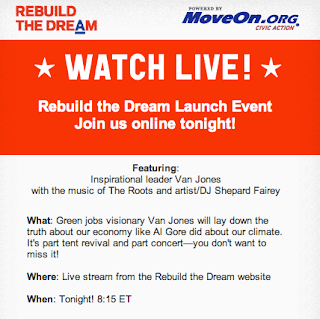 I can't wait to see this fail.


(AlterNet) — Tonight, in New York City’s venerable Town Hall, Van Jones, arguably the most visible progressive “organizer” in America, and surely one of the country’s best orators, steps up to assume a bigger role — that of major progressive strategist and visionary. Tonight is Jones’ opening gambit in a large-scale, ambitious effort to create what many hope will be the progressives answer to the Tea Party.

Jones, with major support from MoveOn.org and other groups, will present a big-picture vision for mobilizing progressive forces of many types and stripes under the patriotic umbrella brand of the “American Dream Movement.” The goal is nothing less than a broad “open source” movement of millions who, via organizing, house parties, events, technological savvy, and electoral activity, will attempt to shift America’s focus away from the budget-cut mentality and the protection of big corporations and banks, to the human and economic support of tens of millions of unemployed and downsized Americans, including returning war vets and young people. (The event, which also features musical group the Roots, will be streamed live beginning at 8:15pm EDT on many Web sites, including AlterNet. Tune in tonight.)

Moveon.org is all you need to know about this: another propaganda device from the globalist gargoyle George Soros.