The Double-Dip Recession May Have Started in April 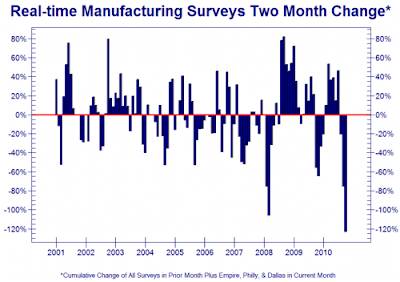 We have to hope this isn't true, but the data is frightening and data does not lie.


(Zero Hedge) — There may be those among the less than brainwashed lemmingerati out there who have noticed what, as we have pointed out for the past month when reporting on the various manufacturing and regional Fed indices, has been an epic collapse in the appropriate data series. As John Lohman so kindly demonstrates, the two month implosion has been beyond epic, and while certainly the biggest drop in the past decade, may also be the all time worst ever.

To the point of this post: the last time we had an economic contraction of this magnitude was back in February of 2008, which was two months into the most acute recession in post-depression history. We are confident that once the groupthink wraps its head around the fact that the auto production based renaissance is not coming, and the economy officially tumbles into the commode of Ben Bernanke’s fiat dungeon, the NBER will determine (with an appropriate 12-18 month delay), that the current recession started in April of 2011.