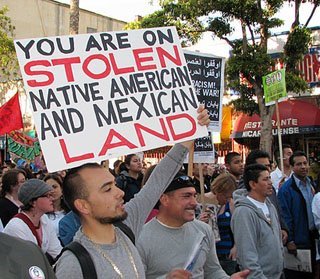 
(Judicial Watch)- A Judicial Watch investigation reveals that federal funding for a Mexican La Raza group that for years has raked in millions of taxpayer dollars has skyrocketed since one of its top officials got a job in the Obama White House.

The influential and politically-connected National Council of La Raza (NCLR) has long benefitted from Uncle Sam’s largess but the group has made a killing since Obama hired its senior vice president (Cecilia Muñoz) in 2009 to be his director of intergovernmental affairs.

Ignored by the mainstream media, Judicial Watch covered the appointment because the president issued a special “ethics waiver” to bring Muñoz aboard since it violated his own lobbyist ban. At the pro illegal immigration NCLR, Muñoz supervised all legislative and advocacy activities on the state and local levels and she was heavily involved in the congressional immigration battles that took place in the George W. Bush Administration.

She also brought in a steady flow of government cash that’s allowed the Washington D.C.-based group to expand nationwide and promote its leftist, open-borders agenda via a network of community organizations dedicated to serving Latinos. Among them are a variety of local groups that provide social services, housing counseling and farm worker assistance as well as publicly-funded charter schools that promote radical Chicano curriculums. Judicial Watch published a special report on this a few years ago. Read more...

After Arizona passed their immigration reform law, a Los Angles schoolteacher at a La Raza protest called for the violent overthrow of the United States government.
Posted by Bluegrass Pundit at 9:02:00 AM