Obama's plans to buy a second term are well underway 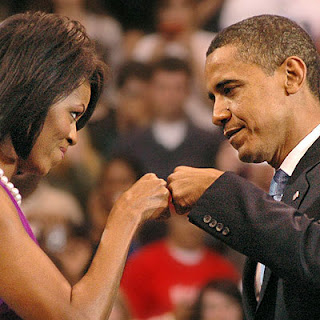 Barack and Michelle Obama will attend a combined five fundraisers in one day.


(White House Dossier) — First Lady Michelle Obama will appear at three fundraisers next Thursday, June 30, bringing to seven the number of fundraisers she has held this month.

The heavy schedule of money raising this far out from Election Day suggests that the Obama reelection campaign is going to make frequent use of the first lady, both to raise money and campaign.
By comparison, former First Lady Laura Bush held 13 fundraisers in all of 2003, the year before George W. Bush’s reelection.

Mrs. Obama’s first fundraiser will be at a luncheon in Boston, followed by two early evening fundraisers in Burlington, Vt.

Much of the cost of Mrs. Obama’s travel will be borne by taxpayers since she has an “official” first lady appearance squeezed in between the Boston and Burlington fundraisers — an event “to show appreciation to the Vermont National Guard and their families,” according to the White House.

President Obama also usually has an “official” event to attend when he travels to raise money. Having such an appearance that defrays costs on the itinerary is common practice for presidents when they travel to fundraisers outside of Washington.

Obama himself will appear at two fundraisers next Thursday in Philadelphia, meaning that between them the Obamas will hold forth at five fundraising events in a single day.