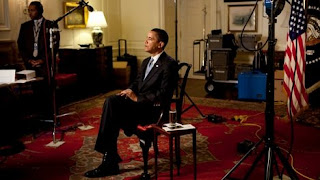 Not only is this shameful, it may also be illegal.

Federal law prohibits fundraising by the president in offices used for official business. The White House contends that the mansion’s residential areas do not fall under this prohibition, pointing out that presidents have used the White House for fundraising before without violating the law.

According to the logs, two “OFA Taping[s]” were conducted in November 2010, in the White House Map Room – in the residential area of the mansion. The tapings happened before Obama announced his candidacy for reelection.

OFA is the abbreviation for Obama for America, the official name of the president’s campaign. While he was not officially a candidate for reelection when the tapings were made, Obama has maintained his political operation throughout his presidency....

According to federal law, “It shall be unlawful for an individual who is an officer or employee of the Federal Government, including the President, Vice President, and Members of Congress, to solicit or receive a donation of money or other thing of value in connection with a Federal, State, or local election, while in any room or building occupied in the discharge of official duties.” (Title 18, subsection 607 U.S.C.)