The Kyoto Protocol is dying and good riddance

The Kyoto Protocol was mostly a scheme to redistribute wealth to third world countries and impose control on free societies by locking down their energy sources. It is dying a slow death because of the global recession and the astronomical costs associated with CO2 reduction.


(The Globe and Mail)- The United States has little credibility at the negotiating table; China is showing signs of “buyer’s remorse” for commitments already made, and the European Union is desperately trying to save the Kyoto Protocol from a premature death.

Negotiators concluded two weeks of climate talks in Bonn on Friday, providing a sobering view of the political roadblocks on the way to Durban, South Africa, where ministers will meet in December

With the world economy still reeling from financial and debt crises, there is a fading hope that countries will accept a pact that would see greenhouse gas emissions peak by 2015 and then begin to drop. And more important, that they will follow through with their own promised emission reductions.

The UN’s chief climate negotiator acknowledged Friday that economic and political challenges are competing with the scientific urgency of reducing emissions.

The thing that should be killing anthropogenic global warming is the data. AGW true believers still claim the science is settled and the refuse to consider recent data. CO2 is still climbing at a steady pace, but the temperature has leveled off. The AGW climate models predicted temperature would rapidly escalate its increase as CO2 rises. That clearly isn't happening. Anyone who can look at the graph posted below and claim CO2 is has a major effect on temperature has left the realm of science and entered Harry Potter's world of magic. 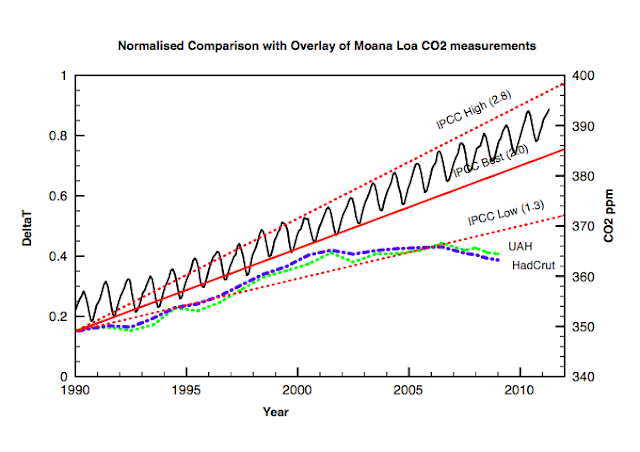