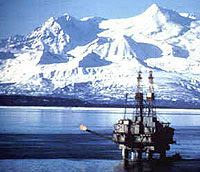 In May, President Obama wanted to fast-track oil drilling in Alaska.


(May 14, 2011) – President Obama will open Alaska’s national petroleum reserve to new drilling, as part of a broad plan aimed at blunting criticism that he is not doing enough to address rising energy prices.
The plan, unveiled in Obama’s weekly radio address Saturday, also would fast-track environmental assessment of petroleum exploration in some portions of the Atlantic and extend the leases of oil companies whose work in the Gulf of Mexico and the Arctic Ocean was interrupted by the drilling moratorium after last year’s BP oil spill.

Of course, it's June now and oil prices have subsided a little.


(June 16, 2011) – The Obama administration today said a proposal from House Natural Resources Chairman Doc Hastings (R-Wash.) to expedite oil and gas leasing and energy infrastructure permitting in an Alaska reserve could force federal regulators to flout environmental laws and includes a costly, redundant resource assessment.
Mike Pool, deputy director of the Bureau of Land Management, also announced the agency will hold lease sales in the National Petroleum Reserve, known as NPR-A, in December 2011 and each year after, making good on the administration’s mid-May promise to expedite development in the 23-million-acre reserve.

So Team Obama's idea of expediting something is to take action seven months later? Only a government bureaucrat would believe that is a fast-track. In private industry, it would get you fired for laziness or incompetence.
Posted by Bluegrass Pundit at 5:48:00 AM