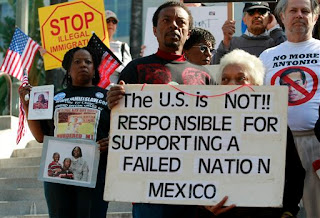 If you are going to catch people here illegally and not prosecute them or deport them, what is the purpose of immigration law? This is a "backdoor amnesty" method.

(Chron) — Homeland Security officials misled the public and Congress last year in an effort to downplay a wave of immigration case dismissals in Houston and other cities amid accusations that they had created a “back-door amnesty,” newly released records show.

The records, obtained through a Freedom of Information Act request, include a series of internal memos from Immigration and Customs Enforcement’s chief counsel in Houston dated last August ordering attorneys to review all new, incoming cases and thousands already pending on the immigration court docket and to file paperwork to dismiss any that did not meet the agency’s “top priorities.” (Read the documents provided by the federal officials in response to a FOIA request here.)

The secretive review process resulted in the dismissal of hundreds of cases in Houston, most of them involving illegal immigrants who had lived in the United States for years without committing serious crimes.