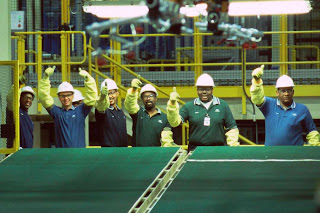 These workers already have great paying jobs and good benefits. Why would they want to pay union dues and risk a strike?


(Bloomberg) — The United Auto Workers is trying to hold its first successful organizing drive at a foreign-car factory in the U.S. To succeed, the union has to convince people like Rocky Long.

“I don’t see any problems here. I don’t see how they could help me out,” said Long, who’s worked at the Hyundai Motor Co. (005380)assembly plant in Montgomery, Alabama, for five years. Of the union representatives who came to his home this year, he said, “I really didn’t give them the time of the day.”

UAW President Bob King has pledged to organize a foreign automaker this year to expand its bargaining power beyond the U.S. companies it has negotiated with for seven decades. While Detroit is mostly retooling old plants, overseas car companies are building and expanding U.S. factories. The union is seeking to revive membership ranks that declined 75 percent to 376,612 last year from its peak of 1.5 million.

Standing in his way are rising sales and added investments at Hyundai’s Alabama complex and sites such as affiliate Kia Motor Corp.’s factory in Georgia. Already, King and his organizers are learning that workers at foreign-owned assembly plants, most of which are in the U.S. South, may not be easy to persuade.

“The UAW has to convince workers that they need a union when in fact without a union they got what they consider to be one of the best jobs they’ve ever had: a good manufacturing job with a company that’s expanding,” Gary Chaison, a professor of industrial relations at Clark University in Worcester, Massachusetts, said in an interview.