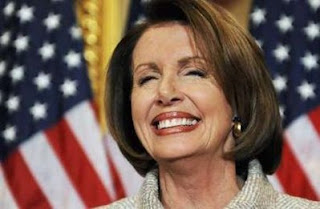 President Obama called on Republicans to "lead" by raising taxes and increasing the debt ceiling. Nancy Pelosi was almost giddy.

(The Hill) — House Minority Leader Nancy Pelosi praised President Obama for finally jumping into the fray with House Democrats against Republican priorities on taxes, the debt ceiling and job creation.

In a statement after an animated Obama spoke at a press conference on Wednesday, Pelosi (D-Calif.) implied that House Democrats have been fighting alone for their party’s priorities without Obama so far this year.

“Bravo! This is the fight House Democrats have been making for the last six months under the Republican Majority as they move to end Medicare and continue tax breaks for Big Oil,” Pelosi said in a statement.

In his news conference, Obama chastised Republicans on not wanting to raise taxes on the rich, ending tax subsidies on oil companies and for accusing him of not leading on raising the debt ceiling.