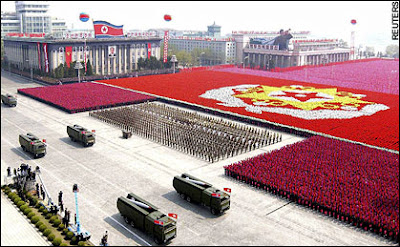 As if we needed another reason to get out of the U.N...


(Daily Caller) — In the latest ‘you’ve got to be kidding’ news from the United Nations, North Korea assumed the presidency of the Conference on Disarmament Tuesday.

“Bare months after the U.N. finally suspended Libya’s Col. Muammar Qaddafi from its Human Rights Council, North Korea wins the propaganda coup of heading the world’s disarmament agency,” the executive director of UN Watch Hillel Neuer said in a statement protesting the move. “It’s asking the fox to guard the chickens, and damages the U.N.’s credibility.”

According to the U.N. summary of the meeting, North Korea’s So Se Pyong addressed the 65-member arms control forum, saying that “he was very much committed to the Conference and during his presidency he welcomed any sort of constructive proposals that strengthened the work and credibility of the body.”