Study: Green Car Mandate Will Eliminate Up to 260,000 Jobs 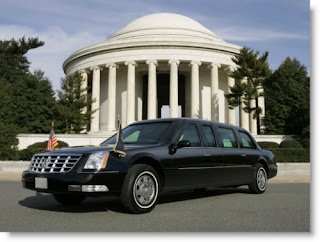 The president's limo won't be following Obama's 'green' mandate for government vehicles
President Obama's green car mandate to raise CAFE requirements to 62 MPG by 2025 will raise car prices by as much as $10,000 and drive down sales by 5.5 million. The result will be a quarter of a million more Americans in the unemployment line. Under the Obama economy, they won't be lonely.


(NRO) — The purpose of federal fuel-economy mandates is to keep the agenda of green pols hidden lest the public awaken to their enormous costs. Want to make cars fuel efficient? Tax gas. And commit political suicide. So instead we get the stealthy Corporate Average Fuel Economy (CAFE) laws, which forces automakers to compromise cars to government standards, not those of customers.

But sometimes those costs still leak out.

The Detroit News’s dogged David Shepardson has unearthed a study by one of world’s most respected automotive research firms that reveals that President Obama’s radical CAFE mandate that vehicles average — average! — 62 MPG by 2025 “could force vehicle prices up by nearly $10,000, reduce sales by 5.5 million vehicles annually, and eliminate more than 260,000 jobs.”
Shepardson is quoting from the Michigan-based Center for Automotive Research and the 260,000 job loss figure (consistent with past job losses from CAFE rule hikes) is another dent in White House’s propaganda that Green creates jobs.

The CAR study also reveals that Obama’s NHTSA and EPA have been gaming the figures when it comes to the cost of their new rules....
Read more here...

The only concern is that car prices may increase as a result of CAFE. The cost of the development of these efficient cars will most likely passed on to consumers