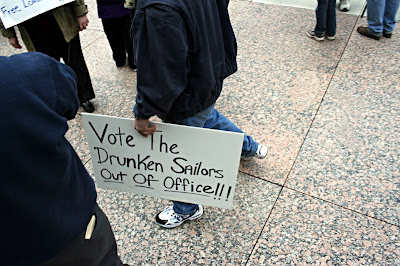 My apologies to drunken sailors everywhere for the headline . Democrats are far worse than you could ever imagine being.


WASHINGTON, June 22 (Reuters) — Democratic leaders called on Wednesday for additional spending to boost the sluggish U.S. economy, setting up a fresh hurdle for bipartisan efforts in Washington to head off a government debt default this summer.

Democrats’ demand for new stimulus spending is at odds with the work of negotiators, led by Vice President Joe Biden, who are trying to find trillions of dollars in savings as part of a deal that would allow Congress to sign off on new government borrowing before the U.S. runs out of money to pay its bills.

Those talks, which resumed on Wednesday, have largely focused on spending cuts over the next 10 years. Senate Democrats want the deal to include more money for highway construction, a payroll tax cut and clean-energy subsidies to bring down the 9.1 percent unemployment rate.