Obvious: Jay Carney can't cite any steps taken by President Obama to soften the impact of the government shutdown 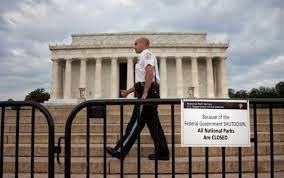 That's because all the steps Obama has taken make the shutdown hurt more...


WASHINGTON — White House spokesman Jay Carney declined to describe any steps taken by President Obama to soften the impact of the government shutdown on Americans.
Instead, Carney tried to blame Congress for the actions of officials in Obama’s agencies who have denied use of free government services by blockading public spaces and parks, shutting down White House and agency websites, and excluding Catholic priests from military bases. [...]
Has the president “used his agency power and asked any regulator to make life easier in any way for Americans, for example … not putting out signs, not picketing parks, and restarting websites?” The Daily Caller asked Carney in the Oct. 4 White House briefing. “Please give me some examples.”
Carney evaded the question by talking about what the president believes, not what he does.
“What I can tell you the president believes that the Speaker of the House, and he’s asking —” Carney replied without offering any examples.