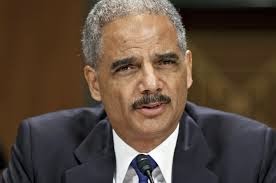 These are some of the documents that Holder took a contempt charge to keep hidden.


Thanks to a Freedom of Information Act Lawsuit pursued against the Department of Justice by government watchdog Judicial Watch, the U.S. District Court for the District of Columbia has ruled documents being withheld from Congress under President Obama’s claim of executive privilege must be turned over. Obama made the claim on the same day Attorney General Eric Holder was voted in criminal and civil contempt of Congress in June 2012.
“This order forces the Obama DOJ, for the first time, to provide a detailed listing of all documents that it has withheld from Congress and the American people for years about the deadly Fast and Furious gun running scandal,” Judicial Watch released in a statement.
The FOIA lawsuit has been ongoing for 16-months and is now proceeding after a lengthy delay. The Justice Department originally asked the court for an indefinite hold on a FOIA request from Judicial Watch, citing executive privilege and an ongoing investigation. That indefinite hold request was shot down more than a year ago.
Keep on reading…