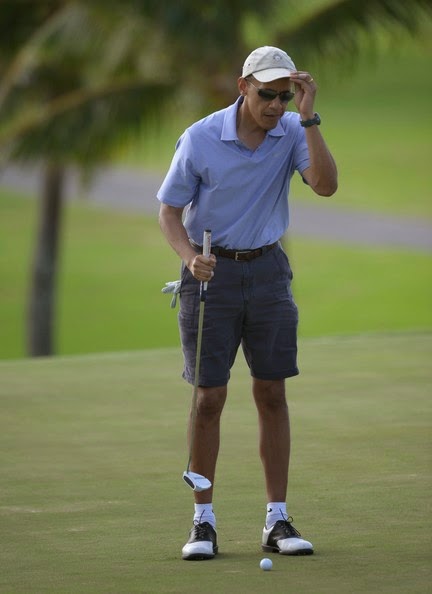 Barack Obama has done a lot of shameful things, but this is certainly one of the worst. Obama is a narcissist who cares only about himself. Earlier, Obama had a beach closed so he could use it privately.


Edward Mallue Jr. and Natalie Heimel had planned to tie the knot on the 16th tee at Kaneohe Klipper golf course when management informed them that they would have to wait a day so the president could hit the links.

Kaneohe Klipper is an 18-hole championship course on the military base that offers views of the Ko’olau Mountains and Pacific coastline.

The episode is the second time the president’s golf game has caused a commotion since he began his vacation last week.

Over the weekend, Malaysian Prime Minister Najib Razak had to defend his recent golf outing with the president after being criticized back home.

This was a double win for Obama. He got to play golf and stick his thumb in the military's eye at the same time.
Posted by Bluegrass Pundit at 2:07:00 PM