North Korea threatens strikes on "the whole U.S. mainland, that cesspool of terrorism." 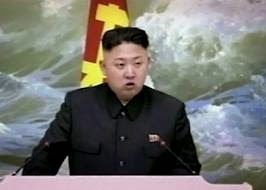 This would be amusing is North Korea didn't have nuclear weapons.  Unless something changes fast, we will be in the same boat with Iran soon.


SEOUL, South Korea (AP) -- President Barack Obama is "recklessly" spreading rumors of a Pyongyang-orchestrated cyberattack of Sony Pictures, North Korea says, as it warns of strikes against the White House, Pentagon and "the whole U.S. mainland, that cesspool of terrorism."
Such rhetoric is routine from North Korea's massive propaganda machine during times of high tension with Washington. But a long statement from the powerful National Defense Commission late Sunday also underscores Pyongyang's sensitivity at a movie whose plot focuses on the assassination of its leader Kim Jong Un, who is the beneficiary of a decades-long cult of personality built around his family dynasty.