Meet the main architect of the deal reached with Cuba 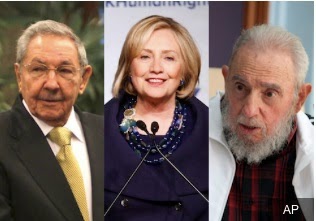 It the progressive in the middle of the above picture...


Hillary Clinton was the main architect of the deal reached with Cuba and her advocacy toward opening a new relationship with the Castro regime began almost immediately when she became secretary of state, according to a report from Bloomberg’s Josh Rogin.
From 2009 until her departure in early 2013, Clinton and her top aides took the lead on the sometimes public, often private interactions with the Cuban government. According to current and former White House and State Department officials and several Cuba policy experts who were involved in the discussions, Clinton was also the top advocate inside the government for ending travel and trade restrictions on Cuba and reversing 50 years of U.S. policy to isolate the Communist island nation. Repeatedly, she pressed the White House to move faster and faced opposition from cautious high-ranking White House officials. […]
Clinton’s advocacy on behalf of opening a new relationship with Cuba began almost as soon as she came into office. Obama had campaigned on a promise to engage enemies, but the White House initially was slow to make good on that pledge, and on the Cuba front enacted only a modest relaxation of travel rules. From the start, Clinton pushed to hold Obama to his promise with regard to Cuba.
Keep on reading…