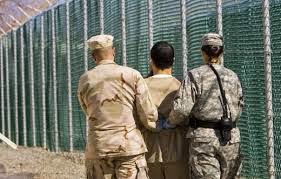 Is Obama notifying Congress of these releases or is he ignoring the law again?


The Defense Department announced Wednesday that five more prisoners will be transferred out of Guantanamo Bay to another nation, in the latest step by the Obama administration to whittle down the prisoner population in pursuit of ultimately closing the camp.
The five men will be transferred to the Central Asian nation of Kazakhstan for resettlement, the U.S. government announced.
The two men from Tunisia and three from Yemen -- who have been at the camp for a dozen years -- had been cleared for release from the prison by a government task force but could not be sent to their homelands. The U.S. has sent hundreds of prisoners from Guantanamo to third countries but this is the first time Kazakhstan has accepted any for resettlement.
Their release brings the prison population at Guantanamo to 127, according to a Pentagon statement on Tuesday.