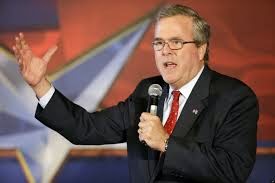 I don't think another Bush or Clinton in the White House in 2016 would be best for the country.Hillary would crush Jeb Bush because she has more name recognition and there isn't enough gap between their positions to really motivate voters.


It’s the first time since Election 2012, notes CNN, that any Republican has held a lead greater than the MOE. Establishmentum?
A poll this early, when Jeb momentarily has the field to himself, is 99 percent useless — but since it’s a slow holiday news week, let’s explore that remaining one percent. Bush has gained nine points since last month’s poll, a bounce obviously driven by his splashy early entry into the race. Will Chris Christie and Rand Paul get similar bounces when they jump in? Here’s your benchmark.
He takes nearly one-quarter — 23% — of Republicans surveyed in the new nationwide poll, putting him 10 points ahead of his closest competitor, New Jersey Gov. Chris Christie, who tallied 13%.
Physician Ben Carson comes in third, with 7% support, and Sen. Rand Paul and former Arkansas Gov. Mike Huckabee are both tied for fourth with 6%.
Keep on reading…

Not my choice for a nominee...in fact, any chosen one by the establishment GOP is not my choice.....McCain, Romany, Rand Paul, etc., etc