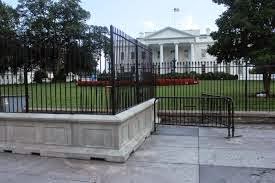 Unfortunately, it's not on the southern border. It's around the White House.


The Department of Homeland Security released an executive summary of its report on the Secret Service moments ago. The report recommends that the U.S. government replace the entire fence surrounding the perimeter of the White House.
The report was drafted after a fence-jumper made it into the White House in September, prompting a congressional hearing and the resignation of Secret Service Director Julia Pierson.
Officials for the DHS declined to say in the report “precisely what the optimal new fence should look like,” but offered some suggestions.
“A number of common-sense improvements should be explored. For sure, the fence must be taller; even an increase of four or five feet would be materially helpful,” the report reads, calling for the fence to be manipulated to include “curvature outward” at the top of the fence to make it more difficult to scale.