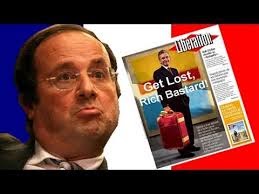 It was really bad PR.

PARIS (Reuters) - When President Francois Hollande unveiled a "super-tax" on the rich in 2012, some feared an exodus of business, sporting and artistic talent. One adviser warned it was a Socialist step too far that would turn France into "Cuba without sun".
Two years on, with the tax due to expire at the end of this month, the mass emigration has not happened. But the damage to France's appeal as a home for top earners has been great, and the pickings from the levy paltry.
"The reform clearly damaged France's reputation and competitiveness," said Jorg Stegemann, head of Kennedy Executive, an executive search firm based in France and Germany.
"It clearly has become harder to attract international senior managers to come to France than it was," he added.
Hollande first floated the 75-percent super-tax on earnings over 1 million euros ($1.2 million) a year in his 2012 campaign to oust his conservative rival Nicolas Sarkozy. It fired up left-wing voters and helped him unseat the incumbent.

Yet ever since, it has been a thorn in his side, helping little in France's effort to bring its public deficit within European Union limits and mixing the message just as Hollande sought to promote a more pro-business image. The adviser who made the "Cuba" gag was Emmanuel Macron, the ex-banker who is now his economy minister.