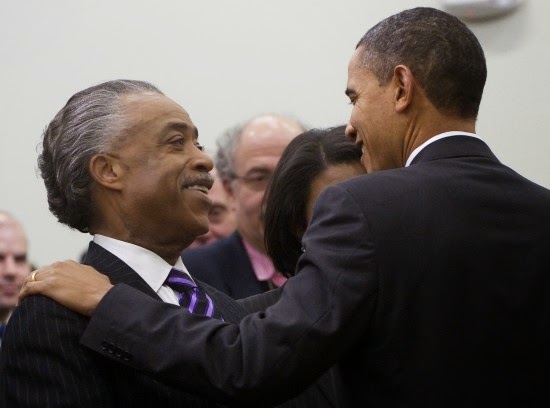 
This, the tail end of 2014, is Al Sharpton’s moment.
Despite the firebrand minister’s shrinking physical stature, his presence on the national stage has never loomed larger. From Ferguson to Cleveland to Staten Island, black men dying at the hands of police have catapulted America’s racial obsession to new heights — carrying Sharpton along with it.
He stands solemnly with Michael Brown’s family at televised press conferences. He appears alongside Eric Garner’s grieving widow on Meet the Press. He delivers nightly sermons on race from his prime-time perch at MSNBC. Though the rehabilitation is far from perfect, it’s a far cry from the days of Tawana Brawley, Freddie’s Fashion Mart, and “white interlopers.”
How to explain the strange new respect accorded to Sharpton? Start with the White House.
Considered politically toxic by Bill Clinton and George W. Bush, Sharpton has been enthusiastically embraced by President Obama. He has bragged about helping to pick a new attorney general and communed with the current one. In fact, a much-quoted Politico profile last summer described Sharpton as Obama’s “go-to man on race.”
Keep on reading…