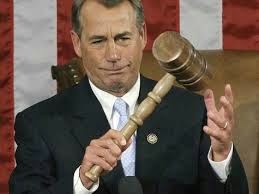 In order for this bill to work, the Senate has to pass it, if Harry Reid would call a vote, and Obama would have to sigh it. (sigh)


This was the bill proposed by conservative Ted Yoho that would, if also passed by the Senate and signed by Obama, block Obama’s authority to remake immigration policy on his own. I … thought we had a Constitution that does that, but I guess we don’t anymore. Obviously, a bill like this isn’t going to get past a Democratic Senate and a Democratic president, which means this was an empty gesture designed to show grassroots righties that the leadership shares their concerns about O’s power grab even if they’re not prepared to play hardball to stop it.
The burning question: With House tea partiers complaining that the bill was meaningless and ineffectual, could Boehner still find a majority to pass it? Yup, as it turns out. Although he needed a little Democratic help to cross the 218 threshold.