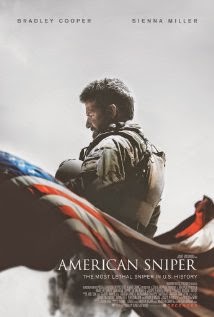 Awesome. I am going to see it next weekend. I have been waiting for the crowds to die down.

Clint Eastwood’s American Sniper remained a phenomenon in its second weekend, earning a stunning $64.4 million from 3,705 theaters and quickly becoming the No. 2 war film of all time at the North American box office, not accounting for inflation. Its domestic total through Sunday is $200.1 million for Warner Bros. and Village Roadshow.
In only 10 days in release, American Sniper has eclipsed the $198.5 million earned all in by Michael Bay’s Pearl Harbor, and it will soon overtake the $216.5 million grossed by Steven Spielberg’s Saving Private Ryan in 1998. Taking inflation into account, Private Ryan would have earned more than $300 million by today’s terms; Sniper is sure to eclipse that number when all is said and done.
Overseas, the decidedly pro-American film earned another $17.6 million from 26 markets, bringing its foreign total to $47.5 million and global haul to $247.6 million. Sniper is a tough sell overseas, but is pulling in solid numbers in Europe and Australia (and it’s a blockbuster in Italy, where Eastwood is an icon).
Keep on reading…