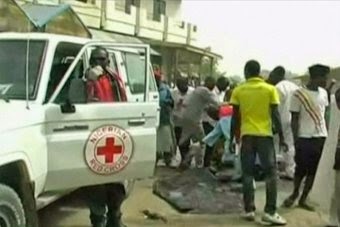 There is no way to deal with these animals. but to kill them. If there is collateral damage, so be it. Also, any government that does not do everything it can to fight these terrorist, should receive the severest trade sanctions and zero U.S. taxpayer's dollars.


(Reuters) - A bomb strapped to a girl aged around 10 years old exploded in a busy market place in the Nigerian city of Maiduguri on Saturday, killing at least 16 people and injuring more than 20, security sources said.
“The explosive devices were wrapped around her body and the girl looked no more than 10 years old,” a police source said.
Maiduguri, the capital of northern Borno state, lies in the heartland of an insurgency by Islamist militant group Boko Haram, and is often hit by bomb attacks.
A Nigerian security source said the bomb went off at 12:15 p.m. The girl was killed and the bodies of at least 16 victims were counted in one hospital by mid-afternoon, civilian joint task force member Zakariya Mohammed told Reuters.
Keep on reading…