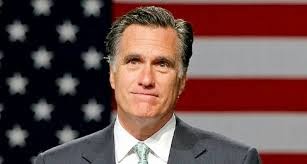 Nobody care what Mitt Romney thinks anymore. He had his chance and blew it.


Is Mitt Romney becoming a climate change crusader?
During his 2012 presidential bid, Romney was dismissive about Democratic efforts to combat the effects of climate change, and he pushed for an expanded commitment to fossil fuels. But in a speech in California on Monday, Romney, who is considering a third run for president in 2016, signaled a shift on the issue. According to the Palm Springs Desert Sun, the former Massachusetts governor “said that while he hopes the skeptics about global climate change are right, he believes it’s real and a major problem,” and he lamented that Washington had done “almost nothing” to stop it.
For Romney, this is his second about-face on climate change. In his 2010 book, No Apology, he called human activity a “contributing factor” to melting ice caps. And in the run-up to the 2012 Republican primaries, Romney backed a reduction in emissions to curb anthropogenic global warming. “I believe based on what I read that the world is getting warmer,” he told the Manchester Union-Leader in 2011. “And…I believe that humans contribute to that. I don’t know how much our contribution is to that, because I know there have been periods of greater heat and warmth in the past, but I believe that we contribute to that. So I think it’s important for us to reduce our emissions of pollutants and greenhouse gases that may well be significant contributors to the climate change and the global warming that you’re seeing.”

That's because there is nothing Washington can do! Sheese, he's toast now.