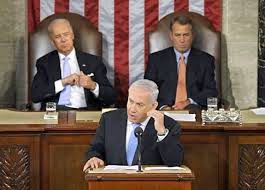 If Obama doesn't care want the GOP controlled Congress thinks, why should they defer to him on anything?

January 21, 2015 President Obama warned Congress Tuesday night that he would veto any new sanctions legislation on Iran, saying it would derail U.S. negotiations in the Middle East. But John Boehner isn't ready to sit out the battle over Iran's nuclear program.
"[Obama's] exact message to us was: 'Hold your fire.' He expects us to stand idly by and do nothing while he cuts a bad deal with Iran. Two words: 'Hell no!'" the House speaker said during his weekly press briefing on Wednesday. "We're going to do no such thing."
Instead, Boehner has invited Israeli Prime Minister Benjamin Netanyahu to address Congress next month. He didn't consult with the White House before extending the invitation, and administration officials are not happy. Press secretary Josh Earnest said Wednesday afternoon that Boehner's invitation is a breach of normal diplomatic protocol. Typically, a nation's leader would contact the White House before planning a visit to the United States, he said. The White House heard about the invite from Boehner's office, not from the Israelis.