Report: Sgt. Bowe Bergdahl to be charged with desertion... 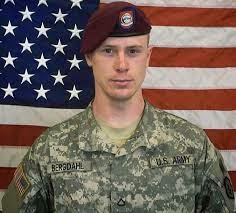 We gave up five high-ranking Taliban commanders to get Bergdahl back. The alleged charge hasn't been officially announced.

Sgt. Bowe Bergdahl, who was released by the Taliban last year in exchange for five prisoners, is being charged with desertion, retired Lt. Col. Tony Schaffer told Bill O’Reilly on “The O’Reilly Factor” Monday.
Mr. Shaffer, who now works for the London Center for Policy Research, said two separate military sources have confirmed to him that Sgt. Bergdahl’s attorney has been given a “charge sheet,” listing out the articles of the uniform military code that have been violated.
“The army has come to its conclusion and Bowe Bergdahl will be charged with desertion,” Mr. Shaffer said.

Email ThisBlogThis!Share to TwitterShare to FacebookShare to Pinterest
Labels: Bergdahl