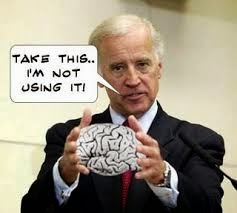 To be honest, Obama probable delayed any significant recovery by at least a couple of years and it's still anemic.


Vice President Joe Biden said he thinks the proposals outlined by President Obama in last night’s State of the Union address will have traction because Republicans are “taking credit for the recovery, so they must think something we did went pretty well.”
“Secondly, they’re talking about the middle class. That’s not been part of their political vocabulary up until now. And so, there’s going to be some stark choices. You know, they’re going to have to decide whether or not they’re going to actually step up, help the middle class, with tax cuts, with education and — on those issues,” Biden told ABC this morning.
“And I believe there’s a significant core of Republicans who believe that now is the time to make this recovery good for everyone and stronger for the middle class.”
Keep reading…