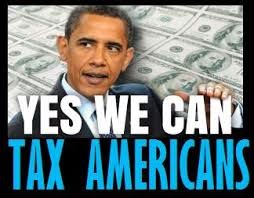 Actually, this isn't surprising. It's standard operating procedure for Democrats.

WASHINGTON – President Barack Obama will call for increasing taxes on the wealthiest Americans by raising the capital gains rate and eliminating a tax break on inheritances, then using the revenue to fund new tax credits and other cost-saving measures for the middle class.
The president’s proposals are likely to be cheered by the Democratic Party’s liberal base, but the tax increases are all but certain to be non-starters with the new Republican majority on Capitol Hill.
Obama will announce the tax proposals Tuesday night in his State of the Union address. Senior administration officials disclosed details Saturday on the condition of anonymity because they were not authorized to discuss the proposals by name ahead of the president.
The president’s address — his first to a Republican-led Congress — will also include calls for lawmakers to make community college free for many students, increase paid leave for workers and enact broad cybersecurity rules.
Keep on reading…