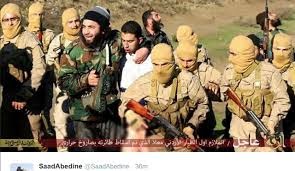 Ballsy move. Obama would have threatened to send a sternly worded letter.


Jordan has threatened to fast-track the execution of a would-be suicide bomber the Islamic State is trying to free if the terror group kills its captured pilot, it was reported today.
The government has apparently warned that Sajida al-Rishawi and other jailed ISIS commanders would be ‘quickly judged and sentenced’ in revenge for Muath al-Kaseasbeh’s death.
It comes after a deadline for a possible prisoner swap allegedly set by ISIS passed yesterday with no clue over the fate of al-Kaseasbeh or fellow Japanese hostage Kenji Goto.
Intelligence sources said ISIS’s refusal to prove that al-Kaseasbeh was alive meant any deal with the militants was doomed.
Now Jordan has reportedly stepped up its rhetoric by warning of its intent to retaliate if the negotiations end in bloodshed.