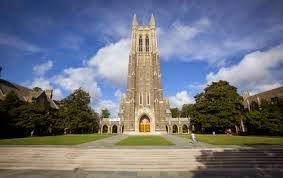 
DURHAM, N.C. — A weekly call to prayer for Muslims will be heard at Duke University starting Friday, school officials said.
Members of the Duke Muslim Students Association will chant the call, known as adhan or azan, from the Duke Chapel bell tower each Friday at 1 p.m. The call to prayer will last about three minutes and be “moderately amplified,” officials said in a statement Tuesday.
“The adhan is the call to prayer that brings Muslims back to their purpose in life, which is to worship God, and serves as a reminder to serve our brothers and sisters in humanity,” said Imam Adeel Zeb, Muslim chaplain at Duke. “The collective Muslim community is truly grateful and excited about Duke’s intentionality toward religious and cultural diversity.”
In majority Muslim countries across the globe, the adhan is broadcast from mosques and on television and radio stations five times a day to correspond with prayer times. On Fridays, the day of worship in Islam, sermons are also broadcast.