Change: “On a mission for both God and Country” too politically incorrect to be used for Army recruiting... 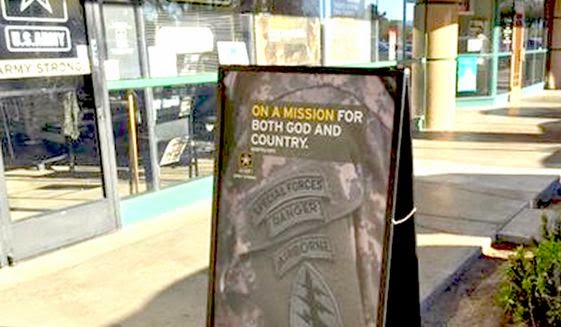 Can we roll the calender back on political correctness?


A poster with the message “On a mission for both God and Country” on display outside a recruiting station in Phoenix was removed Friday morning after it was brought to the attention of the the Army Recruiting Command.
The poster features a Special Forces patch and Ranger, Airborne, and Special Forces tabs with a “stock image” the command makes available for local recruiters to use, “but the text was changed by the local recruiting personnel,” and not cleared by command headquarters, spokesman Brian Lepleytold the Army Times on Friday.
“Had the process been followed, the copy shown would not have been approved,” Mr. Lepley added.